Student Loan Debt Hurts Latinas and Black Women The Most

Americans carry an estimated $1.5 trillion in student loan debt, and nearly two-thirds of that amount, ($929 billion, almost $1 trillion!), is held by women. But women of color, (WOC) have it worse! According to a recent analysis by the American Association of University Women, WOC finish their undergraduate education with more debt than white women. In this same study, about a third of women reported they had trouble covering their basic living expenses over the past year due to their student loan burden. But four in ten Latinas and six in ten black women said they have struggled to cover the essentials and monthly student loan payments.

The idea of financial independence, retiring early, buying a house, starting a family or even starting their own business, has been postponed for many women, especially millennial women of color. The economic hardship strikes particularly hard on black student loan borrowers who default at a higher rate than any other group.

Between 1997 and 2016, the median estimated federal student loan debt across the U.S. went from $3,640 to $30,000. And according to credit.com, by 2019, the average student loan debt per person was $31,172. Based on these staggering numbers, the student loan debt crisis arises from the fact that many Americans are taking on high debt to pay for college but are unable to pay off their student loans due to their incomes being disproportionately small compared to their debt total, as well as the ever-increasing compound interest accruing on their loans. Even before the current pandemic upended the global economy, the gender wage gap made it harder for women, especially WOC to repay their student loans.

Student loan payments can feel overwhelming and it’s so important to understand all your options when it comes time to repay. Luckily, the student loan repayment process doesn’t have to be that complicated and great companies such as Chipper are here to help the POC community! Chipper contacted me and I genuinely love what they’re doing to help Latinas and black women. They offer support for income-driven repayment plans and student loan forgiveness programs, specifically wanting to help women of color succeed with their loan repayments!

And Chipper has our best interest at heart. As their founder, Tony Aguilar, is also Latinx! He is a first-generation graduate from a small West-Texas town and graduated with over $100k in student loan debt. He decided to create Chipper to help his community of POC, since we’re hit the hardest with student loan debt. You can try Chipper now for free, to discover your best plans and programs! As people and women of color, we have the power inside of us to start changing the narrative, be student loan debt-free, and start our journey toward financial freedom! Get started now by clicking this link. 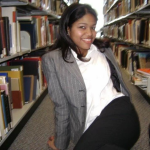